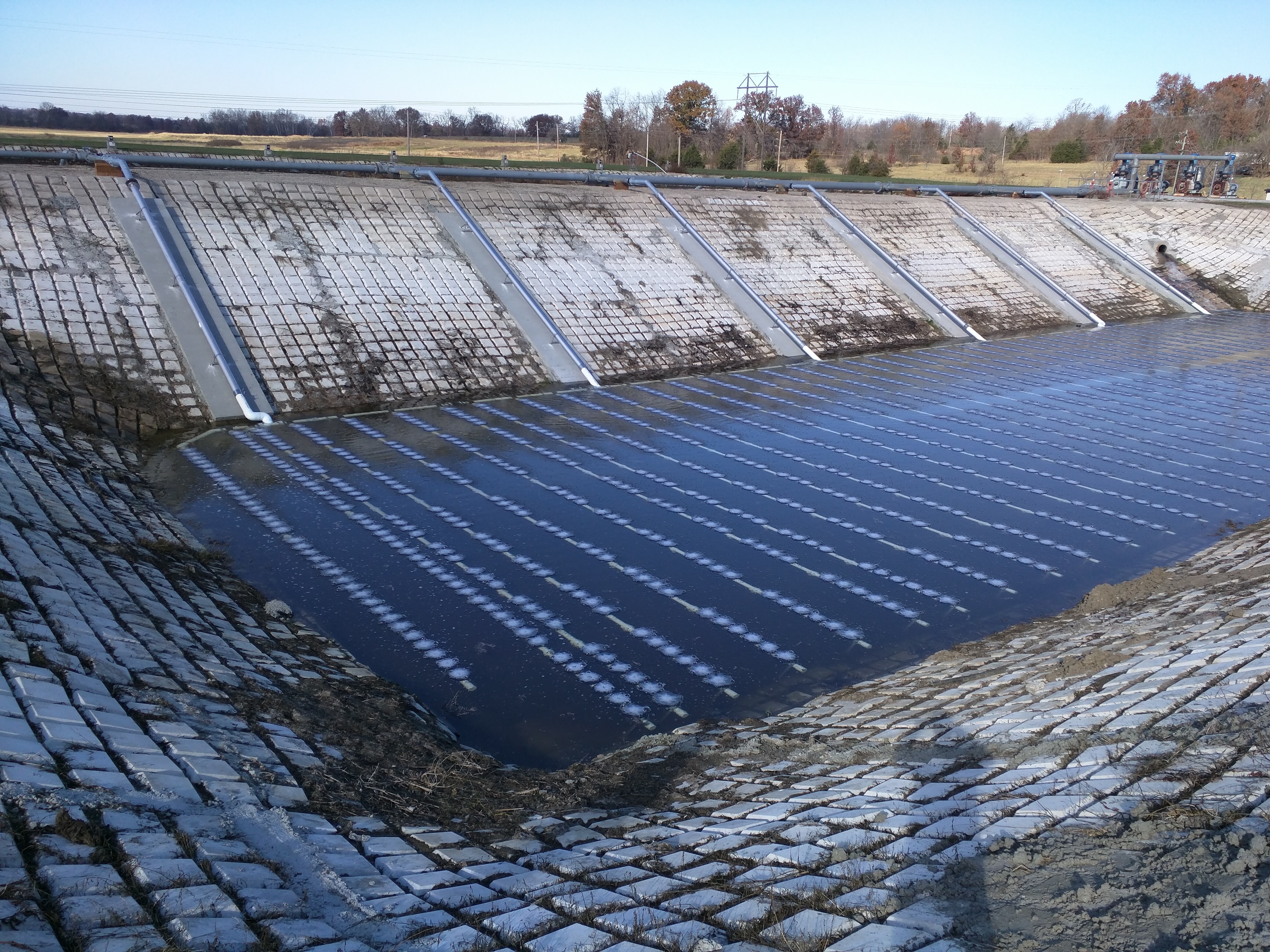 The City of California, MO operates a conventional activated sludge wastewater treatment facility with a design flow of 1.7 MGD and an average flow of 1.4 MGD. It serves a population of 4,400 people and several major industrial customers. The bio-reactors are earthen structures with clay-lined floors.

Although the facility satisfied compliance requirements using their floating-lateral, tubular fine-bubble aeration system, the process was susceptible to biological upset with sudden changes in flow and loading. California, MO was planning for future growth—they wanted a robust aeration system allowing for increased plant treatment capacity while reducing annual energy operating costs. Further, the new aeration system design had to accommodate the existing Lamson Model 857 multi-stage centrifugal blower, and the new system needed to be easier to service and maintain.

The city had a solid relationship with EDI, who they contracted years earlier to supply and install their original aeration system. They requested EDI to assess and offer a turnkey solution.
EDI started with an initial site visit to define the project scope of work and execution plan. Company experts carefully reviewed plant loading data going back two years to establish a performance baseline for the replacement system. They then developed a comprehensive field performance assessment. Gathering and analyzing this data provided EDI invaluable insight and guidance when designing a new, “best-value” aeration system capable of achieving all city objectives.
EDI designed, fabricated, and installed a new aeration system composed of a 6” structural concrete floor slab in the primary aeration basin. This slab supported a fixed-grid, 9” diameter fine-bubble disc system. EDI installed a new DO probe and a new airflow meter to replace the original devices which were not functioning properly. They also added a transmitter connecting these instruments to the existing SCADA system for easier operator control. A new header and piping arrangement was fabricated and installed to accommodate future expansion.

The City is delighted with the results. DO levels within the basin have increased from 1.5 mg/L before the upgrade to 2.5-3 mg/L due to higher O2 transfer efficiency rates and better mixing. Treatment capacity has increased while using less air volume than before. The new system operates with just one blower, whereas the original system required the use of a second blower operating at roughly 50% capacity. Total plant power consumption has been reduced by nearly 28%. Per the City’s request, the existing blower configuration was left unchanged – a substantial cost savings. The fixed-grid disc arrangement and engineered basin slope configuration with sump are now easier and safer to maintain. And process control upgrades, coupled with the higher-efficiency aeration system, enable finer, less granular control of DO levels.

Beyond achieving project objectives, EDI’s new header and piping design support the easy future installation of 20% more diffuser units. Further, the design can accommodate extra piping in between the current setup. These additions allow for a 100% increase in future process capacity, enabling the City to operate their treatment process, with some reconfiguration, as a Sequencing Batch Reactor (SBR) if desired – all important future considerations. EDI also identified operating and process modifications that can significantly improve nitrogen-reduction.

Not only does the new aeration system ensure the plant will continue to meet compliance parameters, but it reduces the demand on existing blower capacity. This enables the City to continue to use existing equipment in the future when demand loads increase, thereby reducing the need for future capital outlays.

EDI’s solution offers easier operation and continuous feedback to ensure the plant performs optimally in response to variations in front-end flow and loading. Additionally, routine maintenance is substantially easier and quicker on the new aeration system.

EDI’s expertise, developed over four decades of experience in designing and installing aeration solutions, guided the successful upgrade on this project. And the design allows for simple expansion of the system to meet future growth requirements.

“(Given) EDI’s familiarity with our system, we reached out to EDI for a more permanent solution with the future of our facility in mind. EDI and the City worked together to develop a design that would work for our future and present needs. Mike Korman at EDI was a true professional and always made it clear that his primary concern was not only a quality finished product but that any concerns or issues were resolved completely to the City’s satisfaction. EDI has many talented and professional employees, and they provided the City with exactly what we wanted.”