Symphony Model Based Digital Solution at City of Lebanon, PA

Solids treatment at the plant consists of anaerobic digestion with gas storage, centrifuges, and sludge drying. The dried sludge is distributed as a beneficial reuse product.

Stage two treatment is split into four identical, parallel trains. Each train consists of an anoxic zone, a swing zone, three IFAS zones, and a final swing zone. Internal mixed liquor recycle (IMLR) pumps return mixed liquor from the final swing zone back to the front of the train. The swing zones can be switched between anoxic or aerobic operation and are incorporated before and after the IFAS zones to enhance denitrification or nitrification as required by process conditions.

The carbon management bypass loop serves multiple functions. First, it reduces the amount of air that must be supplied to the secondary treatment process, saving aeration energy and money. Second, it reduces the amount of carbon consuming heterotrophic bacteria growth on the IFAS media. This allows for additional growth by ammonia removing autotrophic bacteria, increasing ammonia removal. And third, it ensures that carbon is not a rate limiting parameter for denitrification performance.

The BIOS and PAL automation systems or Intelligent Process Automation were installed to tackle the operational challenges. BioChem’s BIOS (Bioprocess Intelligent Optimization System) and PAL (Predictive Aeration Logic) provide integrated process and operational control of the entire secondary treatment process. The control system is unique in its use of model-based algorithms. These algorithms are customized to reflect the physical configuration of the plant. As a virtual digital twin, the controls execute using tactical process and operational commands in real-time. This model-based logic results in precise, accurate, and efficient automation performance.

The control system integrates aeration control, ammonia control, and denitrification control into a single integrated solution that controls the effluent TN while minimizing the process energy consumption. The aeration intensity in the swing zones and IFAS zones is based upon the real time ammonia loading to the process, while the trickling filter bypass and internal recycle rates are varied to maximize denitrification in the anoxic zones, reducing the amount of methanol that would otherwise need to be added to the tertiary denitrification filter to achieve the effluent TN targets.

The aeration blowers are controlled on a total airflow basis, as opposed to a constant pressure basis. Combined with a dynamic most open valve control strategy, the blowers operate at the lowest possible pressure that will supply the required amount of airflow. This becomes especially important considering the combination of fine and coarse bubble diffusers on the same header and the large changes in pressure that occur when the fine bubble diffusers are switched on and off.

The control system employed at the plant has allowed the plant to efficiently meet its permit requirements while minimizing operating costs. It is estimated that the BIOS process optimization is saving 15% compared to using fixed DO setpoints, while the PAL aeration system is saving 10% compared to traditional PID based control. The operating efficiency has also reduced premature wear and tear on the mechanical equipment. Control commands occur every few minutes, not instantaneously as with conventional control solutions.

The PAL and BIOS control solution features self-tuning protocols. The control solution continues to perform without additional tuning since their original commissioning. The below graphs show the performance of PAL and BIOS in 2014 and on the same date 5 years later in 2019. As shown, the PAL controller is able to maintain the dissolved oxygen (DO) within ±0.5 mg/L 97.53% of the time more than 5 years past the original commissioning, while the BIOS controller continues to optimize the DO setpoints based on the ammonia treatment, all without the need for tuning! 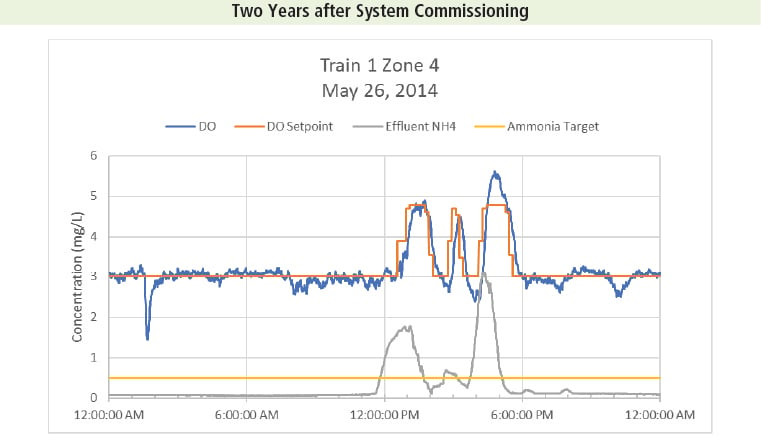 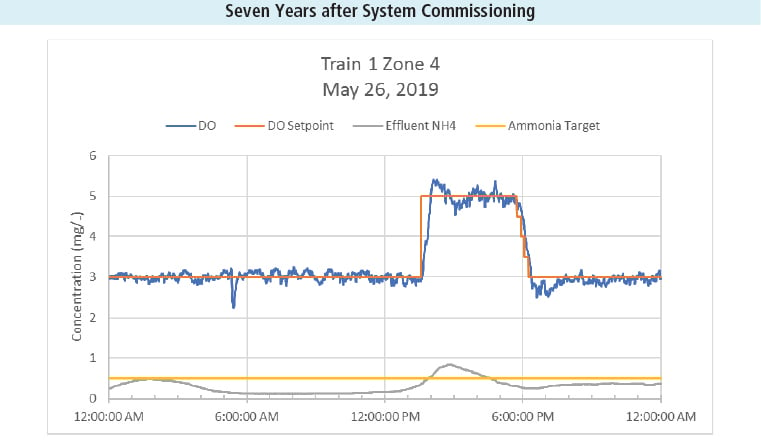